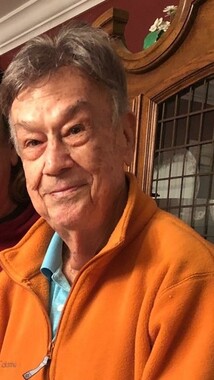 Back to Joe's story

Joe Gentry, age 86, of London, Kentucky, passed away on Tuesday, January 14, 2020 at University of Kentucky Medical Center in Lexington, Kentucky.
He leaves behind his stepson, Ted M. Johnson & wife Judy of Corbin; his sister, Chris Fugate of London; and his stepgrandson, Dustin Johnson. He had a host of nieces and nephews who adored him: Kevin Gentry, Doug Gentry, Cheryl Gentry (deceased), Tim Youngker, Greg Youngker, Christie Youngker (deceased), Jeff Gentry, Stacee Gentry Froning, Tami Gentry Barga, Thomas Fugate (deceased), Timothy Fugate, Teresa Fugate Terhune; and also many great nieces and nephews who cherished their times with Uncle Joe. The loss of his boisterous and fun presence leaves a hole in the hearts of all who knew him.
He was preceded in death by his wife, Eulene Proffitt Gentry; his parents, Thomas Dewey and Ethel Crawford Gentry; two sisters, Willetta House (Glen) and Pauline Youngker (Lester), two brothers, Ted Gentry (Margie), Jack Gentry (Kay); and his brother-in-law, Elbert Fugate.
Joe was a member of First Christian Church in London. He was a veteran of United States Air Force, and he supported the local VFW. He was retired from Conrail Railroad where he worked for 40 years as an engineer.
Joe (Uncle Joe to many) had an obvious outgoing personality that would permeate a room. He could be loud, opinionated, stubborn, proud and funny. Those traits were what we loved the most about him. His presence lit up and gave energy to a room. His way of entering a conversation by saying "Hey! Hey!" to get your attention was legendary. He was an avid UK fan and even liked Louisville because they too were part of the state of Kentucky. He was also a passionate golfer and an exceptional ballroom dancer. After retiring from the railroad and coming back to London, he joined the Hardees breakfast club and hung out with friends most mornings.
A memorial service will be scheduled at a later date. He will be interred alongside his wife at Cumberland Memorial Gardens in Lily, Kentucky. The family has entrusted House-Rawlings Funeral Home with the arrangements.
Published on January 16, 2020
To plant a tree in memory of Joe Gentry, please visit Tribute Store.

Plant a tree in memory
of Joe

A place to share condolences and memories.
The guestbook expires on April 15, 2020.