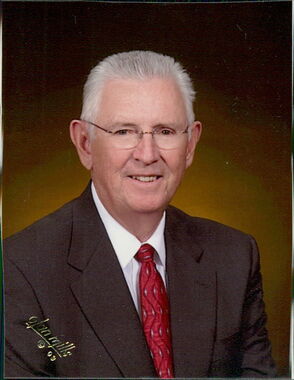 Back to Bobby's story

Bobby Ray (Puppet) (Pup) Morris, born July 24, 1937, entered his heavenly home on December 6, 2019 at his home. He was the son of the late Ethel Boggs and Ernie Morris and the loving husband of Dorothy Meadors Morris.
Bob graduated Corbin High School, Bethel Junior College, where he played basketball on a scholarship, Cumberland College, where he was basketball and track trainer, and Union College, where he received a Master's Degree and Rank I Certification.
Bob began a 37-year career in education at Cumberland High School, where he was a bus driver, coach, teacher, assistant principal and principal. He assumed the duties as principal at Harlan High School, Harlan, Kentucky in June 1983, where he finished his career. He loved young people and enjoyed working with them. After retiring from education, Bob worked with Section 8 Housing and with State Farm Insurance. He also enjoyed helping his son with his cattle farm and being the handy man at his daughter-in-law's medical office.
As a young man, Bob was an active member of Cumberland Jaycees and Lions Club, and he served on the Cumberland City Council. He was a member of the Kentucky High Schools Principals Association and the National High School Principals Association. In addition, he served several years as chairman of the Kentucky High School Beta Club Council and served as a board member of the National Beta Club Association. He was ordained as a deacon at the Cumberland Missionary Baptist Church and served as deacon at Harlan Baptist Church and First Baptist Church London. Bob also enjoyed singing in the church choirs. He was appointed a Kentucky Colonel by Louie B. Nunn.
Bob lived a busy, productive, and fun life. In addition to his educational and professional duties and activities, he avidly participated in numerous sports activities throughout his life, such as football, basketball, swimming, diving, tennis golf, camping, fishing, hiking, canoeing, white water rafting, and horseback riding. He looked forward each year to attending the Gathering of the Hounds, a yearly event when he and his Corbin High School teammates met to remember their high school days.
In addition to his wife, Bob is survived by a daughter, Candace Camille (Kevin) Copes; a son, Robert M. (Nancy) Morris; and four wonderful grandchildren of whom he was extremely proud, Paul Zachary Royce (Madelyn), Paul Robert Copes, Robert Taylor Morris and Alexandra Elizabeth Morris. He is also survived by two sisters, Pat (Paul) Mielke, and Jeanie, (Matthew) DeLullo.
In addition to his parents, he was preceded in death by his mother-in-law and father-in-law, Pearl Hoskins and George C. Meadors; and his sister-in-law and brother-in-law, Peggy Lou Meadors and Willard Metcalf.
Bob will repose at the London Funeral Home, where visitation will be Tuesday, December 10, from 6 to 8 p.m., and a Celebration of Life will be Wednesday, December 11, at 11 a.m., with the Rev. Ryan K. Coffey and Dr. Gregg Curtis officiating.
Serving as pallbearers are Philip Bundy, Michael Coldiron, Paul Robert Copes, Doug House, Rick McCrary, Robert Taylor Morris, Paul Zachary Royce, and J.D. Smith. Honorary Pallbearers will be Matthew DeLullo, Paul Mielke, Roland Cornett, the men of the First Baptist Church London Todd Fields Sunday School Class and his Corbin High School teammates.
Interment will be at the Resthaven Cemetery, Loyall, Kentucky.
In lieu of flowers, the family respectfully requests donations be made in Bob's memory to Heart for the House Building Program at First Baptist Church London, 804 W Fifth Street, London, KY 40741 or VNA Hospice, P O Box 2328, London, KY 40743. Also, the family would like to express their appreciation for the loving care provided by Angela Alvarado and Zelda Blue with Home Helpers Home Care of London, and family friend, Wanda White, which enabled the family to honor Bob's wishes to remain at home during his illness.
Published on December 8, 2019
To plant a tree in memory of Bobby Morris, please visit Tribute Store.

Plant a tree in memory
of Bobby

A place to share condolences and memories.
The guestbook expires on March 07, 2020.