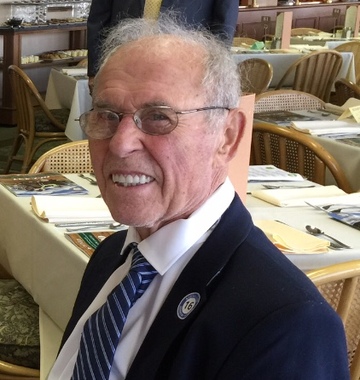 Back to Alfred's story

Alfred John Wurster, age 87, of London, passed away Sunday, December 22, 2019, Baptist Health Corbin in Continue Care Hospital.
He was born on April 4, 1932, in Modlin, Poland, the son of the late Adolf Daniel and Martha Marron Wurster. He is survived by his wife, Janis Carpenter Scoville Wurster, of London; two children, Ellen Foulke (Jim) of Doylestown, Pennsylvania, and Richard Wurster (Mary) of Sparta, North Carolina; four grandchildren; six great grandchildren; one stepdaughter, Margaret Scoville Nottingham (Greg) of Waxhaw, North Carolina; four stepgrandchildren; one brother, Richard Wurster (Dania) of Warrington, Pennsylvania, plus a host of other friends and relatives to mourn his passing.
In addition to his parents, he is preceded in death by one brother, Walter Wurster; and his first wife and the mother of his children, Hilda Varesko Wurster.
Alfred was an artisan in stained glass and a member of the Seventh Day Adventist Church. He migrated with his family to America in 1950.
The family will receive friends at Bowling Funeral Home from 3 to 5 p.m. Sunday, January 5.
Funeral services will be conducted at Wetzel and Son Funeral Home in Willow Grove, Pennsylvania, on January 11 with visitation at 9:30 a.m. and the funeral service at 10 a.m. Burial will follow at White Marsh Memorial Park in Ambler, Pennsylvania.
Published on January 2, 2020
To plant a tree in memory of Alfred Wurster, please visit Tribute Store.

Plant a tree in memory
of Alfred

A place to share condolences and memories.
The guestbook expires on April 01, 2020.

Donald Earl & Rosemary Wyatt
Our prayers and condolences for Mr. Wurster's Family. Janis may God bless and comfort you during this sad time. Love you.
View all